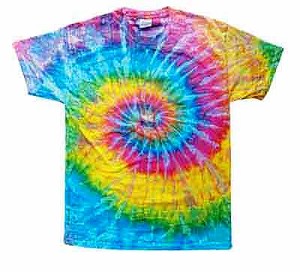 Doug Corey recently published an article with some colleagues. The article was titled “Spirals, Triangles, and Tie-dyed T-shirts” in The College Mathematics Journal. Doug has answered a few questions about this article below.

Who were your co-authors on this article?

I had 2 co-authors: Steven Lauzon, a master’s student in mathematics education, and Jacob Badger, an undergraduate that ended up double majoring in Mechanical Engineering and Mathematics. They are both working on Ph.D’s right now, Steven in Biostatistics and Jacob in Applied Mathematics.

Who would you say is the target audience for this article?

We wrote this for college mathematics teachers. The problem uses a variety of calculus ideas from Calculus 2 and below, including the Fundamental Theorem of Calculus, integration, derivation, arc length of a polar curve, and the simplest of differential equations. We considered it a nice capstone problem to be done at the end of Calculus 2.

What is the big problem you hoped to address with this article?

This article contributes to two big problems: One in mathematics and one about learning mathematics. It is easy for students to finish a college mathematics course and think that the mathematics is too advanced for use in everyday life, and only used in technical fields in science and engineering. We want students to see that the power of mathematics, both elementary and advanced, are powerful tools to make sense of the world around us. We did this by taking a simple everyday object, a tye-died t-shirt, and analyzing the spiral on the shirt.

What are some of the main ideas you hope your audience will take from the article?

I hope that readers will see that wondering about things can lead to some interesting questions and results. The birth of this article was a question that came to me after making tye-died t-shirts at a family reunion. I realized that the spiral on every tie-dyed t-shirt was exactly the same spiral. It didn’t matter if the shirt was large or small, the spirals all came out the same. I started wondering why it should be that way. I sat down to do the math, and with a few assumptions, show that the spiral was logarithmic spiral. Connecting the process of making the shirt with the mathematics was the key in answering the initial question about why all the spirals are the same. Spiral designs are made by laying down a shirt, carefully spread out, then pinching the shirt in the middle and twisting up a shirt into a disk about 8 inches across and about an inch thick. The thickness was the key. T-shirt material naturally folds up about an inch thick. You can actually vary the spiral if you could change the thickness of the disc, but it is hard to do. The thickness of the disc determines the parameter that creates the specific shape of the logarithmic spiral (growing slowly or quickly).

What else would you like to say about this article?

This exploration led us to some bizarre connections that are not in the article. One of the most amazing was helping engineers to solve a problem on collapsible solar arrays! We started to work with paper models to understand what was happening as we twisted up objects, and that led us, particularly my undergraduate research assistant, to start collaborating with engineers that use origami principles in their designs. They had developed a collapsible solar array that could be twisted up, put into a rocket, launched into outer space and untwisted and deployed. They were having trouble with their design. They had to make the joints very loose to allow it to fold up and untwist. Using what we learned about logarithmic spirals and twisting up flat objects, they hypothesized that placing the joints along a logarithmic spiral pattern would allow the joints to be tighter. Two years after we had discovered this, NASA engineers came to campus and presented on a new design for deployable solar arrays. It was exactly our design! The design that came about just by wondering about the spiral shape on a tye-died t-shirt.